Start a Wiki
Coily is one of Q*bert's primary enemies, along with Wrong-Way and Ugg. Coily can be considered as the main antagonist of the Q*bert series. This character is also known as Carrot Ends (sometimes spelled Carrot Ens) because the head and tail loosely resemble carrots.

In the original game, Coily's main goal appeared to be to bite Q*bert. He always started off as a Coily egg, which bounced down to the center of the pyramid, where it hatched. Then, Coily would pursue Q*bert. The only way to get rid of Coily was to use a Transport Disk, which would cause Coily to jump right off the edge. Though the multiples of the character seem to suggest that "Coily" is an entire species of snake. 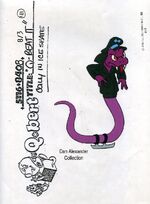 As opposed to his in-game appearance, Coily in the animated series is depicted as the leader of a greaser-type gang of troublemakers. Portrayed by Frank W. Welker.

In the third game, Coily played the same role as in the original.

In the 1999 game, Coily takes on the role of main antagonist, being responsible for the destruction of Q*Bert's world and the abduction of Q*dina. Throughout the game, he appears in levels chasing down Q*Bert much like the original, though as the game progresses he appears less frequently.

His role is increased slightly when the player enters the Q*dina section of the game, using vortexes to move Q*dina from level to level when Q*Bert comes within reach of saving her.

The final stage of the game is a showdown with a giant Coily, sending several normal-sized Coily to ambush Q*bert- while Q*bert retaliates with transport discs.

In the Q*bert 2004 flash game, Coily performed the same role as in the original. However, like Wrong-Way, Ugg, Slick and Sam, he appeared differently depending on the board type.

In the reboot game, Coily plays the same role as in the original.

Coily was confirmed to appear in Disney's 52nd animated feature, Wreck-It Ralph, along with the rest of the ensemble from the first game. They start out as homeless characters who have had their game unplugged, so Ralph offers them a cherry which he has taken from Pac-Man. At the end of the film, Q*bert and the gang are taken into Fix-It Felix Jr. to help them out on the bonus levels.

Coily makes a brief cameo in the end credits on the scene where he and the other 8-bit characters are attacking Washington DC in 8-bit style.

Retrieved from "https://qbert.fandom.com/wiki/Coily?oldid=5245"
Community content is available under CC-BY-SA unless otherwise noted.